We caught up with former world champion Shaun Murphy at our flagship store as he tried on the navy three piece suit he wore at the Dafabet Masters 2018.

What would you say is the key to your success?

Without wanting to sound boring, the key to my success is hard work and a lot of practice. I spend many hours in my snooker room at home, which I call my office and my wife calls my boys room. I’m constantly practicing and working on my game. I watch re-runs of my matches to try to see where it went wrong, where it went right and what I can improve on.  I’m very analytical about where I can make improvements and in top flight sport, a very small improvement can have a massive impact.

How did winning the 2005 World Championship change your life?

It seems like a lifetime ago now to be honest with you! Winning the 2005 World Championship changed my life because up until that day I’d lived in complete anonymity.  As a snooker player you don’t really have any concept of how many people watch snooker until the day after something like that. Nearly eight million people watched that final and in the weeks afterwards people would stop me in the petrol station or the supermarket and tell me how much they enjoyed that match. That’s when it suddenly dawned on me that snooker in this country is a huge thing. From that point on, I was no longer able to just slip in and out of places unnoticed.

What was it like winning the world title so young?

Very strange actually, because it was my first professional win and most players would usually progress from winning a smaller event and gradually build their way up to a major event. I jumped in at the deep end and won the biggest one first! When I watch the video back and I’m there with the trophy you can see I don’t really know what to do with it, because I didn’t know how it worked. There are a lot of self-help books to deal with failure but there are no books advising how to deal with success so I just had to make it up as I went along. In the early days I said a few things and made a few comments I shouldn’t have done – I was very young and a bit strong-headed and I wish I could go back and calm myself down a little bit.

What sacrifices did you have to make to be a professional snooker player?

That’s a very interesting question because I turned professional at 15. Before that, what I wanted to do above everything else was to play snooker. I left school at 13 and I did my GCSEs at 14 and from that point on I played snooker full-time until I turned professional. I don’t consider this a sacrifice because I felt at the time that I was living the best life out of all my friends and I couldn’t understand why they weren’t doing the same. GCSEs, A levels and University were of no interest to me whatsoever because I wanted to be a snooker player from the age of 8 years old. I didn’t party all the time like my friends but I didn’t consider that a sacrifice.

How did you get into snooker in the first place?

It was completely by fluke! The Commodore 64 computers had just come out and I asked my parents for one for Christmas because all my friends had one. On Christmas morning I unwrapped a little snooker table from Toys R Us instead! But as soon as I took up a cue and starting knocking a few balls around I loved it.

When you’re playing snooker, what do you look for in a suit?

Snooker is a funny game because you spend a lot of time just chilling out around the table but then in an instant you can be stretching out in odd positions. I always look for a suit that fits well and it’s got to give you flexibility because you’ve got to be able to get into some awkward positions. I also look for something lightweight because it can get really hot under the TV cameras and the arena stadium lights. And it has to look the part.  Looking good gives you that extra little bounce around the table and a bit of extra confidence. I look for a really nice cut, something that stands out and something that looks classy; those would be the key points.

What is your signature look when you are playing snooker?

My signature look has changed over the years; in the past I’ve worn multi-coloured suits and tried different things. Snooker outfits can be a bit mundane because everyone looks the same.  A few years ago I had four or five multi-coloured outfits for the World Championships and wore a different one for every match. For one of the World Championships the guy who made the costumes for Strictly Come Dancing made me a suit with Swarovski crystals down the satin strip of the trousers. You put a bit of pressure on yourself wearing clothes like that! In fact, I walked out of my dressing room and Steve Davis, one the best players of all time, said “wow, you’re going to have to play very well wearing that today otherwise I’m going to destroy you in Coventry.” Fortunately I played OK. At 35 years old I’ve learnt to be a bit more conservative. Although I’m quite eccentric sometimes, now I prefer traditional tailoring and I tend to opt for a very nice grey or navy suit – nothing too silly.

What do you wear away from the baize?

A mix and match – I’ve always been a bit older before my time, so now I’ve just become a father I’m trying to dress a bit younger! I spend a lot of time at home practising, so I wear jeans and a polo shirt. If I’m going out practicing with someone or going out working I usually wear something very smart. I was always brought up that it’s important to make an effort, so I’ve always felt more comfortable in a smart suit rather than a pair of tracksuit bottoms.

What are your pre-match rituals?

I try to stay away from pre-match rituals but I am very meticulous when it comes to organising my things when I go on tour because I like everything in its place. I’ve got this box of things for when I’m on tour with all my bow ties in there and my collar stiffeners; everything’s in that box and that goes everywhere with me. Before a match I like to make sure everything is pressed and polished and in order.

Do you have any hobbies?

Away from snooker I’m a big sports fan; I particularly like golf and tennis. I play as much golf as I possibly can. With my snooker commitments around the world playing 30 events a year, there’s not much room for other activities.

Rumour has it you’re quite a good piano player as well?

You shouldn’t believe everything you hear! I can play the piano - I wouldn’t call myself a pianist but I can knock out an Elton John or Beatles song if there’s a few drinks involved!

If you were not a professional snooker player, what profession would you have seen yourself in?

I chose snooker so young, I was probably 10 when I committed my life to snooker – that sounds so silly saying that now – but that’s what we did as a family. It’s only as I’ve grown up that I’ve thought about what else I could have done. I probably would have tried to go into law or something like that. I love watching Suits and I sit there and think “I could do that, I could have that argument with somebody, I could have that nice office.”

Who do you think is the greatest snooker player of all time?

That’s a very hard question to answer. As far as players are concerned, the best player we’ve ever seen on the table has to be Ronnie O’Sullivan. He hasn’t won the most tournaments but as far as his ability is concerned and the generally high standard he plays to all the time, it would have to be Ronnie.

What do you like best about the Hawes & Curtis suit you’re wearing for the Masters 2018?

I’ve gone for the navy dinner suit as it is subtly different to your average black dinner suit. The quality is great and the fit is perfect. 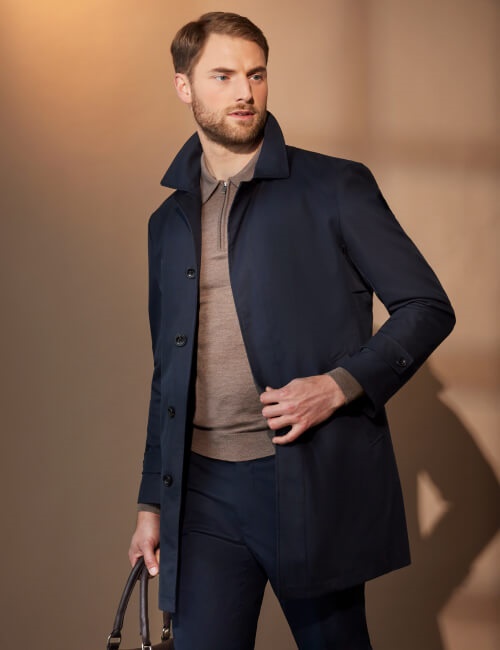 Your 2022 Coat Guide - Coats for every occasion

Keep your outfits looking fresh and modern by switching up your coats to compliment your attire. From casual coats, to luxury coats, we have it all.